I feel after having this for a few months I can officially write a review.First, I got this amazing product for my cat. I moved in with my boyfriend into a house at the beginning of the year and he has two medium sized dogs who use the dog door to go potty. I also brought with me my two indoor only cats, who were about 6 years upon move in. We knew our biggest challenge was my indoor cats and the dog door. I knew I had to give in and let them be outdoor during the day when we were not home and bring them in at night where they could be locked in our room for bedtime with us, which would keep them safe from predators and allow the dogs to still use the dog door to go potty through the night. Everything was going great until my cats got out a little early one morning, at 5am but before the sun was fully up. And, it was the last time we’ve seen my girl cat. Devastated by the loss of my cat who was practically my child I sought after something that would allow me to find my other in case of him getting out or anything of sorts. I wanted to know where he was going and when. Insert the whistle....I was skeptical at first, in fact, I almost sent it back after the first week. I realized my cat stays mostly within range of our WiFi, so even if we can’t see him the whistle can’t find him if he’s close enough for WiFi connection. So I thought it wouldn’t work for us. But, luckily he generally comes to my whistle and voice if he’s that close. We decided to really stick it out and give it a try.He has accidentally got out a handful of times at night and usually out of range of WiFi. And, the whistle has done its job every night including tonight. If it wasn’t for the whistle my cat probably wouldn’t be home safe with tin 10 minutes of realizing he’s gone every single night he’s got out. The whistle alerts me when he goes out of range shows me right where he is ( our house is back against a trail that is dirt and people walk in but it takes you into trees) and it shows where I am so I know when I’m getting close. The minute I get a text he’s out of his allowed area I am able to turn on the fast flash ( I almost didn’t get this feature, if you’re getting it for a cat you NEED this feature) and I can spot the flash from super far away. And, we’ve done this so many times that when we get close to him he’s usually starting to run back home because he sees the flash. We believe he knows that means come home or we’re coming for him.Because, he’s in WiFi range for a majority of the day the battery last a week if not more before needing to be charge. ALWAYS fully charge it especially if you’re gone for a week. I made this mistake when we went on a week vacation to another state. We locked him in our room the entire trip so he couldn’t go outside at all as we wouldn’t be home and I didn’t want the cat sitter to have the responsibility of ensuring he was inside before sunset every evening. The last few days we were out of state I got alerts he was super far from home and the cat sitter who lives down the street had to come over and make sure he was here, and he was. The battery was just so low it started glitching. So that was a user error not a whistle error and it’s just a PSA for anyone who purchases it.I am so obsessed with this product and I cannot speak more highly of it!

I have had my Whistle Go Explore for several weeks so I feel confident enough to write a thorough review. I was extremely skeptical of this type of technology but I took the leap and I’m glad I did. I also bought the collar Whistle specifically makes for housing the GPS/Activity Tracker.Right out of the box, it is ready to go. All you have to do is download the whistle app on your phone, charge the device, and navigate through the initial setup—all done through the Whistle app. Setup is super easy and relatively quick. **Whistle does require a subscription**. That may seem like a draw back but it’s no more than $5 a month. For me, it is worth it for the peace of mind if my dog gets lost.Pros:-durable. The device does show wear after some extensive play but it is purely cosmetic. The plastic used is very strong, light, and water resistant.-accurate. Device is accurate the vast majority of the time. I have ran into some issues where the app took an extensive period of time to load and track his location but after a period of a minute or two it was back working as usual.-easy set up.-tracks fitness levels and sets goals based on weight, age, and breed-tracks scratching and licking. EXTREMELY useful feature. The device tracks how many minutes per day your dog scratches or licks and compares that to a baseline average. If your dog licks or scratches more than usual, the whistle app will notify you. Really useful during flea and tick season. Increased scratching might mean it’s time for a flea treatment.-LED light. Pretty cool feature. LED light is fairly bright at night. It has slow and fast strobe as well as a continuous on mode.Cons:-device does show cosmetic wear after a short period. It does not effect the function of the collar.-Rare connectivity issuesTo summarize: if you are looking to simultaneously attain peace of mind in the event your dog gets lost, track your dogs health, and have a LED light to use at night this is the collar for you. It’s durable, the subscription is not that expensive, and the Whistle collar is perfect for mounting the device. You can use your own collar with the included mounting attachment, but the collar with the receiver specifically made for the device is metal and super strong. The buckle on the collar is also metal. The little loopy thing that you attach leashes to is also metal. It’s nice :) You won’t be disappointed.

T
Tracy Spears
Amazing product that provides me with a calming peace of mind!

I cannot speak highly enough about Whistle -- both as a company and as a product!We currently use the Go Explore yet I've been a loyal Whistle customer for a couple of years now.I first learned about and purchased the Whistle 3 just over two years ago when our beloved kitty, Roxie, went missing for a full two weeks! Devastated we moved on with our lives hoping that she'd come home but fearing the worst. She came home on her own hungry for love, attention and of course food! We were elated and it was right after that that we purchased our first Whistle product.Since then, knowing that I can track her whereabouts when she's out and about in the neighborhood brings me a peace of mind that I cannot explain unless you have lost a pet before. I am a much calmer person when Roxie is wearing her Whistle tracker.Recently, she lost her device and we went without for far too long. I wrote the company and they provided us with a new Whistle Go Explore tracker FOR FREE (they have a policy that they can replace a device if the lost device meets certain criteria). I was elated to hear of this policy and to receive our device free of charge. The customer service has been impeccable and I could not have asked for better service -- this has been the case since I became a (now very loyal) Whistle customer!If you are considering buying a Whistle tracker, wait no longer -- make the purchase! You will not regret it!Thank you, Whistle!

I purchased these for my dogs as we were moving from the city to the country, a big change for my older dogs. We don't have a fence and I wanted to make sure we could find them if they ever got loose. Thankfully, in the 9 months that I've had them, they've only been truly needed once, but they did their job excellently when it mattered. This brings me a peace of mind as I live with an elderly family member and my dogs are big, so this helps as well in case something happens when I am not home. 1000% recommend this product.

I love the Go and Explore Whistle. I originally got the Whistle 3, but since my kitties are far away from the wifi for a few hours a day the battery only lasted for ~2 days. I upgraded to the Go and Explore Whistle and it lasts much much longer. I got it 7 days ago and it is now at 20%. Will probably charge tomorrow, depending on how much she travels tonight.The app is extremely accurate. With the quick release collars, the collars sometimes fall off and I've easily found the the collar and tracker still attached. So recommend getting a more sturdy but cat safe collar. If they are not in by dark I go and find the kitties and bring them in. I've never had issues finding them, it's AMAZING! We live in an urban area which may help with it's accuracy.Our cats are 10 months old, 7.5lbs (pictured); 2.5 years old, 9lbs; 9 years, 9lbs. 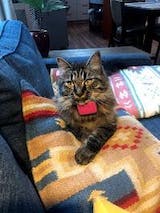 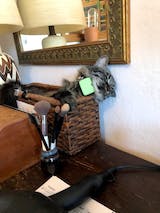 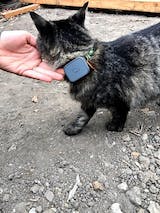